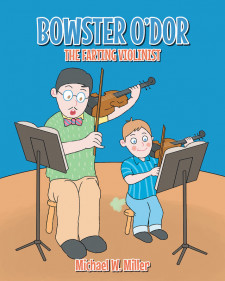 Recent release 'Bowster O'dor: The Farting Violinist' from Covenant Books author Michael W. Miller is an enthralling tale that revolves around the story of a young boy who loves to play the violin and overcome the problem his tutor has discovered.

BOONSBORO, Md., February 26, 2021 (Newswire.com) - Michael W. Miller, a who was hired as a music teacher for Frederick County Public Schools and now owns and operates his private teaching studio instructing children in music offering studies in piano and orchestra instruments including violin, has completed his new book "Bowster O'dor: The Farting Violinist": a gripping children's book that invites young readers to always believe in themselves in whatever they do especially when showing off their talents to many people.

Michael writes, "'Bowster O'dor the Farting Violinist' is about a young boy of about ten years old who wants to eagerly play the violin. Bowster's mother agrees to buy him a violin only on the condition that he practices and work very hard at it. Bowster gets his new violin but doesn't seem to know how to use it very properly. After screeching several times on his violin, Bowster gets frustrated and asked his mother if he can have a violin teacher. His mother immediately searches for a good violin teacher for him. After several interviews, Bowster's mother settles on hiring Mr. Forkunk. The day comes for Mr. Forkunk to come to the house for Bowster's first violin lesson. Bowster learns many new skills on his violin, and Mr. Forkunk is very pleased. But something unusual starts happening during Bowster's violin lessons. Bowster has a gas problem! Bowster farts constantly during his violin lessons with Mr. Forkunk. Mr. Forkunk has to take drastic action. Bowster eventually has to participate in a recital. Mr. Forkunk wonders anxiously if Bowster can make it through his recital on stage without farting."

Published by Covenant Books of Murrells Inlet, South Carolina, Miller's new book provides children a remarkable lesson that will help them kill the butterflies in their stomachs when they are about to perform on stage.

Readers can purchase "Bowster O'dor: The Farting Violinist" at bookstores everywhere, or online at the Apple iTunes store, Amazon, or Barnes and Noble.