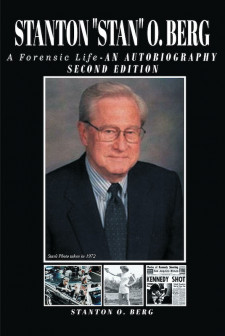 Recent release "STANTON 'Stan' O. BERG: A FORENSIC LIFE: An Autobiography" from Covenant Books author Stanton O. Berg looks back again into his fascinating life through narratives, photographs, and illustrations of his fifty-plus years in the field of forensics.

FRIDLEY, Minn., March 2, 2021 (Newswire.com) - Stanton O. Berg, a writer with a lifelong forensic firearms career, has completed his new book, "STANTON 'Stan' O. BERG: A FORENSIC LIFE: An Autobiography": a beguiling account that chronicles Stan's career and his involvement in major and minor events in the society as a forensic expert.

Stanton writes, "While this second edition of the autobiography of Stanton O. Berg's (Stan's) life and times, is also a short history of United States during the Great Depression and also the history of the development of the forensic science with some inclusion of Sherlock Holmes in that history.

Stan's four years army service in the Counter Intelligence Corps at Baltimore, Maryland, and his weekend work with the Baltimore Police crime laboratory is reviewed.

In looking back at Stan's forensic science career, one will find Stan handled one thousand cases, testified in legal proceedings over 350 times. Stan with his wife June, as his administrative assistant, attended 170 forensic science conferences in the U.S., Canada, and Europe.

Stan often was a conference speaker and four times served as conference chairman. As Stan looks back at his career, he finds that, in some way or the other, Stan has been involved in almost every important case during the wild '60s and '70s—the assassinations of Pres. John Kennedy, Martin Luther King Jr., and Robert Kennedy; Chicago Police shooting raid on Black Panther headquarters; and the SLA ambush shooting of Oakland School superintendent with cyanide-tipped bullets.

Stan's career also consisted of much investigation and testimony in the area of civil litigation, gun accidents, and gun safety designs. This second edition of Stanton O. Berg's (Stan's) autobiography has been greatly enlarged and expanded from the first edition.

Published by Covenant Books of Murrells Inlet, South Carolina, Stanton O. Berg's new book is a promising forensic expert's retelling of a challenging but fulfilling life in his chosen field. Throughout a variety of cases, readers will witness how he tackled them one by one.

Coupled with more photographs and illustrations, this second edition will definitely have the readers reliving a life in forensics much more.

Readers can purchase "STANTON 'Stan' O. BERG: A FORENSIC LIFE: An Autobiography" at bookstores everywhere, or online at the Apple iTunes store, Amazon, or Barnes & Noble.